How Often Should I Get My Brakes Checked?

Did you know that the first braking mechanism to slow a vehicle and prevent momentum was tested in the 1800s?

Brakes Have Changed Greatly Over Time

Over the centuries the braking system has evolved so heavily and quickly and there have been many forms of brakes making it difficult to pinpoint exactly when and who the invention of the brakes happened.

What we do know is that the brake system evolution began in the 16th century and hasn’t stopped since. There have been many different types of braking systems created.

Wooden block brakes are the earliest brake system that applied the physical principles used to design brakes today. However, the system only consisted of wooden blocks and a single lever that is used by the driver to apply the wooden brakes. This form of brakes was used on vehicles with steel-rimmed wheels, including horse-drawn buggies and steam-driven automobiles.

Expanding internal shoe brakes was the first braking system to be fastened on the inside of the vehicle’s frame.

The four-wheel braking system using hydraulics was first introduced in 1918 by Malcolm Lounghead. This system used fluids to transfer force to the brake shoe when the pedal was pressed. This specific braking system was adopted in nearly every vehicle by the late 1920s.

Contrary to popular belief the disc brake was invented way before they became popular. They were patented by William Lanchester in 1902. Although it was patented in 1902 the braking system did not become popular until the big industry boom in the mid-20th century. The rise of the disc brakes is attributed to the weight and speed increase capabilities of vehicles, which caused hydraulic brakes to become less efficient in distributing heat. The first system that used disc brakes integrated disc and hydraulic brake functions was the Chrysler Imperial.

The anti-lock braking system, better known as ABS, was created to assist prior braking systems to prevent the brakes from locking up while in use. Anti-locking brakes work by sensing when a lock is about to occur and igniting a system of hydraulic valves to reduce the pressure of a brake on a wheel. The anti-lock braking system transformed and revolutionized the way brakes function in vehicles today and provide more control for the modern driver.

The evolution of the braking system has come a long way and thankfully has provided the opportunity for drivers to be safer and more efficient on the road.

When you choose 2’u’BRAKES you can cut your shop time in half and avoid the lines in total.

You can receive that premium auto-repair shop experience but stress-free and at an affordable price with a service that comes to you. 2’u’BRAKES is Cincinnati’s first trusted mobile auto and brake repair service.

Contact us today to schedule your at-home auto repair. 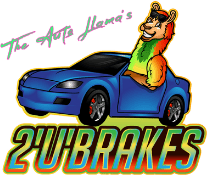 The Auto Llama is currently offering brake repair services at the vehicle’s location in the Greater Cincinnati area.

If you’d like to save time and money on your next brake service, contact us today to get your price and schedule your service.